Biosensor is a device that uses biological materials to monitor the presence of various chemicals in a substance. A sensor that integrates a biological element with a physiochemical transducer to produce an electronic signal proportional to a single analyte.
We are developing CMOS compatible Micro/nano fabricated biosensors which have the advantages of high surface-to-volume ratio; high sensitivity; low sample consumption; Label-free detections; Low cost and high throughput. 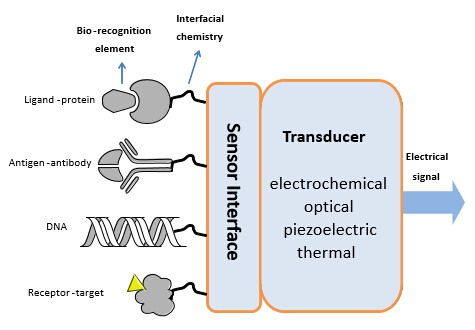 Electronic nose (e-nose) gas sensor array is a platform that comprises a large number of different sensors coupled with pattern-recognition protocols. In each sensor of e-nose system, chemically sensitive layer for target gas molecule detection is coupled with a transducer which transforms the interactions between the gas molecules and chemical coatings into readable signals.

We are developing CMOS compatible portable e-nose system that can be used for on-site and real-time detection of volatile organic compounds, particulate matter and exhaled breath.

Gas sensor based on self-assembled monolayer

Gas sensor based on supramolecular monolayer

We developed a simple approach to trap chemical functionalized polymers in PDMS thin membranes which can be used as sensitive probes for TNT and metal ions rapid detections. The colorimetric change can be easily identified with naked eye and quantified with a cellphone.

A new protein sensing interface is developed using PLL conjugated with oligo-ethylene glycol layer which facilities the sensor functionalization simply by incubating and prevents protein fouling on the surface.

High frequency acoustic device will induce micro-vortexes at the device-liquid interfaces which can be applied as a dedicated tool to enhance fluidic mixing, manipulate particles, cells and biomolecules at micro/nano scale, and control the molecules assembling and disassembling at the surfaces.

We developed ‘hypersonic poration’ as a new technology to open cell membranes which is based on GHz sound and generated by MEMS acoustic resonators. It can effectively form reversible temporal nanopores on cells, improve membrane permeability and lead to the enhancement of intracellular delivery of exogenous materials such as target drugs and genes.

Lab on a Chip

Integrating multiple microelectromechanical resonators both as actuators and sensors is developed as a compact lab-on-a-chip microsystem. On-chip heating, mixing and chemical reaction monitoring are successfully demonstrated.